Our mission in the Minnesota Conference is to help people realize they are accepted in Jesus Christ, and come to know, love, serve, and share Him.  How do we measure that?   How do we measure our effectiveness?  We can’t know the disciple’s heart; but, there are some key indicators.  We also recognize that it is God, by His Holy Spirit, who draws people to Jesus.

We keep track of baptisms, professions of faith, membership, tithe, and worship attendance.  Recently, we also started tracking the number of new churches being planted and the number of small groups in the churches.  These are either leading indicators or lag indicators of our disciple-making effectiveness.  There are many other aspects of ministry which we could measure.

During 2016, our average Sabbath worship service total attendance in the churches of the Conference was 3,950 people per Sabbath.  It is interesting to note that the average attendance varies significantly from month to month.   Average reported attendance in April is 42% greater than in November.

Baptisms and professions of faith during 2016 was our second highest number ever recorded and oddly totaled exactly 500.  There were 320 baptisms and 180 professions of faith. This is a rate of 5.08% compared to membership. Church membership increased by 276 in 2016, ending the year at 9,834. Note that the baptisms/POF number is different from the membership increase because of things like: transfers to other conferences, deaths, removals, etc.

Even with these occurrences which reduce our membership number, the Conference grew by 2.9%. The glory goes to God.  His people cooperate with Him.  We expect to see the Conference cross the 10,000-member mark sometime in 2017.  And while we like to see our membership grow, it is our hope that there will be 10,000 disciples rather than just 10,000 members.

The increase in tithe we’ve experienced will help us bring even more children to Christ in 2017.

While building the 2017 Budget for the Minnesota Conference, several expenses were challenging the creation of a balanced budget.  The day before presenting to the Conference Board of Trustees, the first draft of the budget was stressful for the Treasury team because it is generally not a great idea to walk into a board meeting with an unbalanced budget.

Reading our devotional book the morning prior to the board meeting, my wife and I read the following: “Our heavenly Father has a thousand ways to provide for us of which we know nothing.  Those who accept the one principle of making the service of God supreme, will find perplexities vanish and a plain path before their feet.”  Ministry of Healing, pg 481.

As the Treasury team projected the 2016 tithe based on prior years, we conservatively estimated that if all churches turned in all the reports, we might make $1.1 million for December tithe.  Then, as we entered remittance data on January 19, the numbers didn’t seem to be adding up correctly.  We decided to wait to close the 2016 remittances until the following Monday, January 23.  After a few more reports came in, and we closed the month, we were stunned by what God had just done for Minnesota.

The highest recorded December tithe in Minnesota was received in 2012, and totaled $1,232,452.  The highest recorded year-total tithe came in 2015, with a total tithe of $7,708,287.  Most of the churches turned in their remittances through November, meaning the usual practice of estimating December tithe as a “double” month was looking rather grim.  In addition, in the metro area, one Sabbath in December we expected a reduction in tithe because so many churches closed due to weather.

While it does take a partnership of Divine and human working together, and while recognizing that the continual promoting of Stewardship, as well as our members challenging God by being faithful in tithes and offerings, we can only say “Praise God” for His outpouring of blessings to His people.  The work isn’t done, the call for more workers is overwhelming, and God’s return is almost here.  Won’t you join us as we praise God for the outpouring of His blessings in 2016, and challenge Him in 2017, as He said to do in Malachi 3:10. 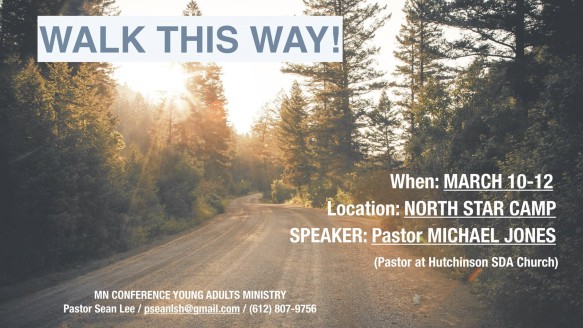 The Minnesota Conference Young Adults ministry team would like to invite you to North Star Camp, March 10-12, for a special weekend of joyful fellowship, great food and dynamic messages from Pastor Michael Jones.  Pastor Michael will be sharing a series entitled, “Walk This Way”, with small group discussions to follow. This will be a great time of inspirational worship and praise together as we discuss serving God in one accord with unity in Jesus. We hope you can make it!

Because this is geared towards young adults, we do not have children’s programs available, and parents must supervise their own children. In addition, we have limited space to accommodate families. If you need to bring your children, please call Pastor Sean Lee at 612.807.9756 to register.

We have two openings for full time pastors in the Minnesota Conference. Interested parties should contact Human Resources at 763.424.8923 or scarlson@mnsda.com. Those interested should provide a resume, at least three professional references, and a cover letter.

We have two openings for full time Bible workers in the Minnesota Conference. These openings are based in Hackensack and International Falls, Minn. Interested parties should contact Human Resources at 763.424.8923 or scarlson@mnsda.com. Those interested should provide a resume, at least three professional references, and a cover letter.

We have an Administrative Assistant position open at the Minnesota Conference Office, located in Maple Grove, Minn. This person reports to the President and Evangelism Coordinator, and the Director for Planned Giving & Trust Services, Property Management, Stewardship and Personal Ministries. We are looking for someone willing to take some course work to earn an NAD certification, strong critical thinking and writing skills and a team-oriented mindset. The hours are Monday through Thursday, 8 a.m. to 6 p.m. Interested parties should contact Human Resources at 763.424.8923 or scarlson@mnsda.com.

50 years ago – February 12, 1967 – Pastor Ray and Bonnie (Lang) Daniel were married in the old College View Church in Lincoln, Nebraska on Lincoln’s birthday. Fittingly, the temperature was 67°! They’re celebrating with their children on Hilton Head Island, South Carolina from February 12-19.

Luis Pedro Ajete, born April 14, 1960, a member of the Minneapolis Hispanic SDA Church, passed away on September 13, 2016. He is survived by his twin brother, Pedro Luis Ajete.

Edna Anderson from the Bemidji SDA Church passed away on December 4, 2016.

Donald G. Conklin of St. Paul, Minnesota passed away at the age of 88. Preceded in death by his wife, Jean and son, Steven.  Survived by his son, David, daughters and husbands, Bonnie and Kevin Mayer and Karen and Paul McPherson.  Survived by 4 grandchildren, 7 great grandchildren and numerous nieces and nephews. His memorial service was held Sunday, Jan 8 at St. Paul Eastside SDA Church at 2 pm.  Entombment at Fort Snelling National Cemetery.

Lawrence and Shirley Gross of the All Nations SDA Church passed away while in Liberia on December 25, 2016.

James C “Jay” Jamison, b. Dec. 12, 1951, in Topeka, KS. d. Dec. 16, 2016, in St. Louis Park part of Minneapolis, MN.  He was 65 years old. Member of Minneapolis First Church.  Preceded in death by his parents, and wife Joan Cushman Fine.  Survived by 3 stepchildren Steven (Anna), Laura (Karen), and Scott Fine and grandchildren Michael, Leah and Alex; also by his siblings, Michael (Rosalyn) Hyatt, Katherine, Cameron, Jacqueline, Georgine, and Dale Jamison. Jay was a lifelong artist and writer, with a great interest in music and movies.  He completed close to 300 paintings and up to 1,000 drawings, and received numerous ribbon awards and acknowledgments for his work.  His work has been on display in many art shows and galleries throughout the Los Angeles and Twin Cities areas during his lifetime, including 3 times at the Minneapolis Institute of Arts.

Bonnie Johnson of the Minnetonka SDA Church passed away on January 1, 2017.

John Sutherland, born December 22, 1953, a member of the Arlington SDA Church, passed away on December 13, 2016. His funeral was held on Sunday, December 18 at the Hutchinson SDA Church.

Jean E. Senne, age 87, of Medford, MN, passed away Thursday, January 27, 2017, at Medford Senior Care in Medford. Memorial services were held on Friday, February 3, 2017, at 11:00 a.m. at the Faribault Seventh-Day Adventist Church with Pastor Bob Brauer officiating.  Interment will be held at the Meadow Ridge Memorial Park in Faribault, MN at a later date.

Jean Ellen was born on March 19, 1929 in Faribault to John “Jack” and Esther (Lewis) McKellip.  She attended Maplewood Academy in Hutchinson, MN.  Jean was united in marriage to Hebert M. Senne on June 1, 1947 in Faribault.  She worked at Sears prior to her lengthy career at Mealey’s Restaurant in Faribault.  Jean was the pastry chef for years while raising her family.  She then managed the restaurant and was also a candy maker, which she continued doing into her retirement.  Jean devoted much of her life to her family and her church, volunteering in many capacities at Faribault Seventh-Day Adventist Church.

She was preceded in death by her parents; daughter, Laurie Staber; and brothers, Jack McKellip, Dick McKellip, and Bruce McKellip.