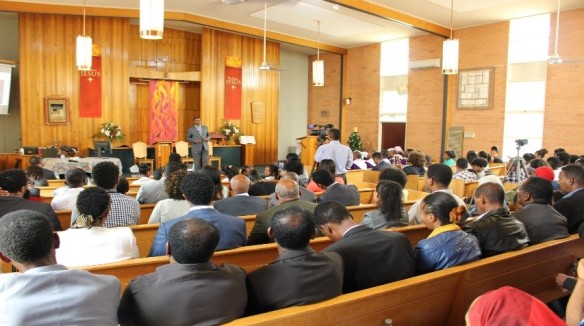 The Minnesota Conference of Seventh-day Adventist Church has a rich experience of reaching out to the immigrant community with the good news of the Gospel. Time and again it has reached out to Seventh-day Adventist Churches outside of the NAD and the result has been very encouraging. Did the leadership in Minnesota Conference know that the immigrant churches they support could play a vital role in a conference located half way around the globe? We have a true story to share with you.

In 2014, Oromo immigrants in the Victoria Conference in Melbourne, Australia, made a service request to the Oromo Seventh-day Adventist Church in Minnesota. They wanted to gain experience to reach thousands of fellow immigrants from East Africa that reside in the City of Melbourne, Australia. Their objective was to form a church that can work with the Victoria Conference and be a force multiplier in evangelizing the city of Melbourne. A three days revival meeting attended by over 150 people was conducted by Pastor Desta Gelgelu. It was for the first time that such an effort was made in the city of Melbourne designed and coordinated by Oromo immigrants. In April 2015, another follow up meeting was conducted by Dr. Abraham Dalu. That meeting was another effort that galvanized the former Oromo Seventh-day Adventists in the city of Melbourne

In a 2015 a service request was sent from Victoria Conference to conduct another revival meeting on January 1-3, 2016. The meeting was attended by about 200 people. Some of them came from as far away as Sydney and Perth to Melbourne. It was a great time of revival. About ten people rededicated their life to be part of the ministry of the church.  Now the small group in the City of Melbourne has become a well organized dynamic church.  Those of us who took part in the effort did not have time, but we trusted God that He would bless our humble effort and use it for a great cause. We appreciate the visionary and able leadership, as well as the Board of Trustees at the Minnesota Conference for encouraging us to reach out to the brethren in Melbourne. In each step  the leadership of the Minnesota Conference was involved in counseling and praying for those of us involved in an effort to reach out to the children of God with the message of  hope built in the firm belief of the soon Coming of the Redeemer of this troubled world. The exemplary actions taken by Minnesota Conference is a good example of how one entity of the Seventh-day Adventist Church can play a vital role outside of its territories. We may be short of financial resources but we have been able to minister, as well as do a lot with the small means. God has the ability to multiply our little resource and use it for a big cause. Looking back, I have a great joy to see a thriving church in Victoria Conference.