Early this year Keith and Barb Christiansen went to India as part of the ongoing Minnesota Conference mission trip – India project. Barb tells about their visit to Thippapaly village to witness baptisms. She said when they got there, they were told “We have a problem in the village. A 23-year-old man died of cerebral hemorrhage during the night. No one will come out to the baptisms or eat, drink, light a fire or bathe until the body is buried, they won’t even come to the meeting tonight.” 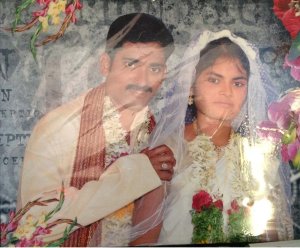 They went to visit the man’s 17-year-old widow, who was two months pregnant. Barb said, “Imagine the scene in the village, the body of the dead man was still in bed, covered with a brightly colored blanket. The young widow was sitting on the ground beside the bed, caressing her dead husband and the rest of the 150-200 villagers sat on the ground, weeping and wailing. It was a setting that was reminiscent of Mary and Martha’s home when Lazarus died. Our translator was able to press in and pray for Arush, the widow.”

When Barb started to place her hand on Arush’s head, intending to pray for her, she took Barb’s hand and placed it on her dead husband body. This young widow begged through her tears for Barb to bring her husband back to life. Barb told the translator to tell her “Only God can raise the dead”. She continued to assure her that “all those who are dead in Jesus will rise again when Jesus comes the second time.” Barb then started to pray, “Lord, help thou my unbelief”.  With tears running down her face she prayed for God to raise the young man up if it was His will, however, this did not happen. When it was time to leave, Arush clung to Barb’s sari. This young widow begged, “Just wait, 15 more minutes and you will see, he will rise.” Still he did not rise!

Keith then prayed for the large group of villagers. They left for the evening meeting which coincidently, the topic for that night was on the topic of Death.  Would the villagers continue to come out to the meetings, or would they see this as a sign of bad omen and stop coming to the meetings? That night the attendance was down but because of the loud speakers many of those who were at the funeral house- the home of the deceased, could still hear the good news. Death is not the end, Jesus has overcome death! The next night the attendance was back up to 375-400, Praise God. The meetings where well attended each night. Barb and Keith were called false prophets because they couldn’t raise the dead, but in the end the Lord was victorious, with 249 souls being baptized.

The Baptism in the Upper Malyala Village

Excitement was quite high, yet subdued; a Hindu couple of high caste was going to be baptized. A few years before the wife was at the point of death. They had spent over $166,000 USD, trying to find a cure for her but nothing seemed to work. A friend recommended that she should maybe read the Bible since everything else had failed. This lady began faithfully reading her Bible, and she was healed.

In the process of reading the Bible, she got to know a Sunday keeping pastor, and amazingly through him, she met a Seventh day Adventist pastor. The Seventh day Adventist pastor was conducting some evangelistic meetings, which this lady attended and accepted the truth. She chose to be baptized. There was so much excitement because of what happened in the lives of this couple. The pastor says because of this influence, she might bring 200 people from the community into the church.